What is a Praying Mantis?

What is the mantis or, better known as, the praying mantis? A praying mantis is an insect that contains more than 2,400 species of its kind making it one of the largest insect families. These insects can grow up to 2 or 3 inches long with a life span of about a year, on average. Mantises, though predators, are essentially harmless to humans and can even be considered pets. The mantis does not sting, as it does not have venom, nor do they typically bite. 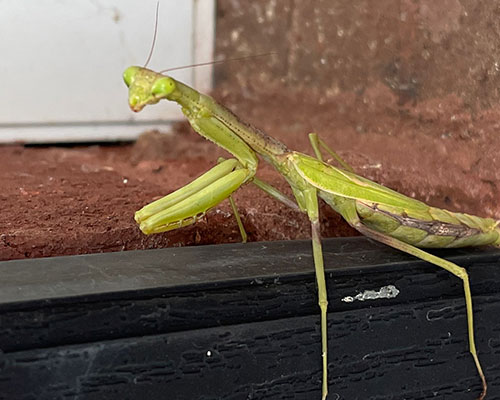 The praying mantis gets its name from the very distinguished position of its front legs. Their legs are bent and held together at an angle which suggests the position of prayer. Since these insects are hunters, they use their front legs to grab its prey and pounce at lightning-fast speed; they also use sharp spikes to hold their victims in place until they are ready to eat. It can be beneficial to have these insects around, as they eat other insects and everyday pests such as spiders! They also like to hunt and prey on beetles, grasshoppers, butterflies, and in some cases if they’re hungry, they will eat each other.

How do I tell the difference in male and female mantises?

If you ever want to identify the sex of a mantis you can do so by looking at the number of body segments. Males have 8 abdominal segments while the female only has 6. The final segment of the female is much larger in size while the male has smaller segments towards the end.

While it’s good luck to have a mantis in your yard, other bugs can be a nuisance. If you need bugs of any kind removed from your property, contact Prime Pest Solutions and we’ll come take a look.